Elon Musk has been called eccentric, egomaniac and outright crazy by his detractors. 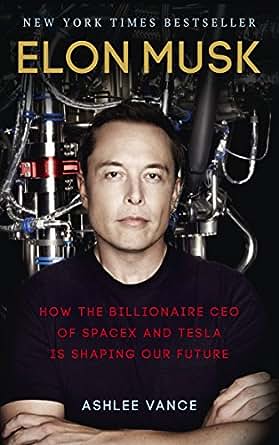 That said, Ashlee Vance presents a well researched unbiased biography of Musk, after talking to people from all walks of his life, people from both the pro and anti Musk groups. My verdict -> it is an amazing book and very well narrated by Fred Sanders. Yes books these days mean ‘Audible’ to me as I go through my daily morning biking.

Musk had a very difficult childhood and came to the US with absolutely no wealth. But his ambition to change the world and his brilliant mind has made him a billionaire today. He has created ‘history changing’ companies like SpaceX, Tesla, SolarCity and many more. Probably history will look back at him and worship him as one of the top contributors to humanity and its survival. The real life iron man.

Musk has set out to correct humanity’s path - a path towards sustainable energy and clean earth, and to turn us to a multi planet species. We don’t want to end up like the dinos. He has single handedly done what the rest of the countries and century old companies thought and declared as impossible. He is shaping our future. Him giving away all of Tesla’s patents in 2014 so that everyone goes electric is proof of the man’s intentions.

The book is very inspiring and makes you introspect. It makes you to want to go out and do better - to the best of your abilities and beyond and to never give up…

Popular posts from this blog

December 22, 2011
Well today I'm being a bit controversial. Let us see what the HTML5 spec says about unique IDs in a HTML file. The  id  attribute specifies its element's  unique identifier (ID) . The value must be unique amongst all the IDs in the element's  home subtree  and must contain at least one character. The value must not contain any  space characters . An element's  unique identifier  can be used for a variety of purposes, most notably as a way to link to specific parts of a document using fragment identifiers, as a way to target an element when scripting, and as a way to style a specific element from CSS. Yes its been mentioned almost everywhere on the planet that ID must be unique. Now let us look at the below code, Launch dup.css #p2 {   background-color: yellow;  } dup-id.html <!DOCTYPE html> <html>   <head>     <title>Duplicate ID Tester</title> <link rel="stylesheet" href="dup.css" />
9 comments
Read more

December 16, 2011
I've encountered this question repeatedly of late. "What are the tags required at bare minimum for a html file?" Earlier there were a bunch of mandatory tags that were required for any html file. At bare minimum, the recommended structure was: (ref: http://www.w3.org/TR/html4/struct/global.html ) <!DOCTYPE HTML PUBLIC "-//W3C//DTD HTML 4.01//EN" "http://www.w3.org/TR/html4/strict.dtd"> <HTML>   <HEAD>     <TITLE>A small HTML</TITLE>   </HEAD>   <BODY>     <P>Small HTML file!</P>   </BODY> </HTML> Yes, using capitals for the tags was the way to go! Those were the days of the purists and strict was the way to be. Now open your notepad and copy the above code, save the file as old.html and launch it in Chrome or Firefox. You will see only one line "Small HTML file!" shown. Now launch the developer tools in Chrome or Inspect Element in Firefox. Thi
19 comments
Read more

April 10, 2012
Had to fix all time related issues on a remote RHEL 6 server which runs without any windowing system. Plain ol' command line. Documenting steps here for future reference: Check to see if your date and timezone settings are accurate: # date # cat /etc/sysconfig/clock The server I accessed had wrong settings for both the commands. Here are the steps I used to correct: Find out your timezone from the folder /usr/share/zoneinfo # ls /usr/share/zoneinfo Mine was pointing to America/EDT instead of  Asia/Calcutta Update and save the /etc/sysconfig/clock file to # sudo vi /etc/sysconfig/clock ZONE="Asia/Calcutta" UTC=true ARC=false Remove the /etc/localtime # sudo rm /etc/localtime Create a new soft link to your time zone # cd /etc # sudo ln -s /usr/share/zoneinfo/Asia/Calcutta /etc/localtime # ls -al localtime Now it should show the link to your time zone Set your hardware clock to UTC # sudo hwclock --systohc --utc # hwclock --show Update your t
16 comments
Read more